Work With Us Online

Training Around the Menstrual Cycle

There is a big buzz surrounding the female menstrual cycle in the press recently following Heather Watson speaking out at the Australian open about how her performance was down to “women’s problems”.

There has been a lot of speculation about whether the menstrual cycle has a big impact on performance.

I am here today to tell you that it does!

This is not to say that all females should follow the approach I will explain here however if you are finding it tough to make progress during your cycle hopefully I can shed some light on why and what to do about it.

What you need to know;

There are two distinct phases of the menstrual cycle.

The follicular phase is marked by the beginning of menses (day 1) and ends at ovulation (day 14) clearly there can be some differences between women and their timing.

The second phase of the cycle is the luteal phase. This phase is marked by the start of ovulation.

In this chart you will see a key for the hormones that are relevant in in the menstrual cycle. Below are what each of these hormones do in terms of fat storage;

P= Progesterone– In terms of body fat storage “P” also has a decentralizing effect on body fat stores and encourages storage at the top of the legs and ass or perhaps more accurately, not on the abdomen.

Progesterone opposes the action of oestrogen and has been cited to make the body more insulin resistant. So, based on these metabolic changes women may want to watch their carbohydrate intake during the luteal phase. 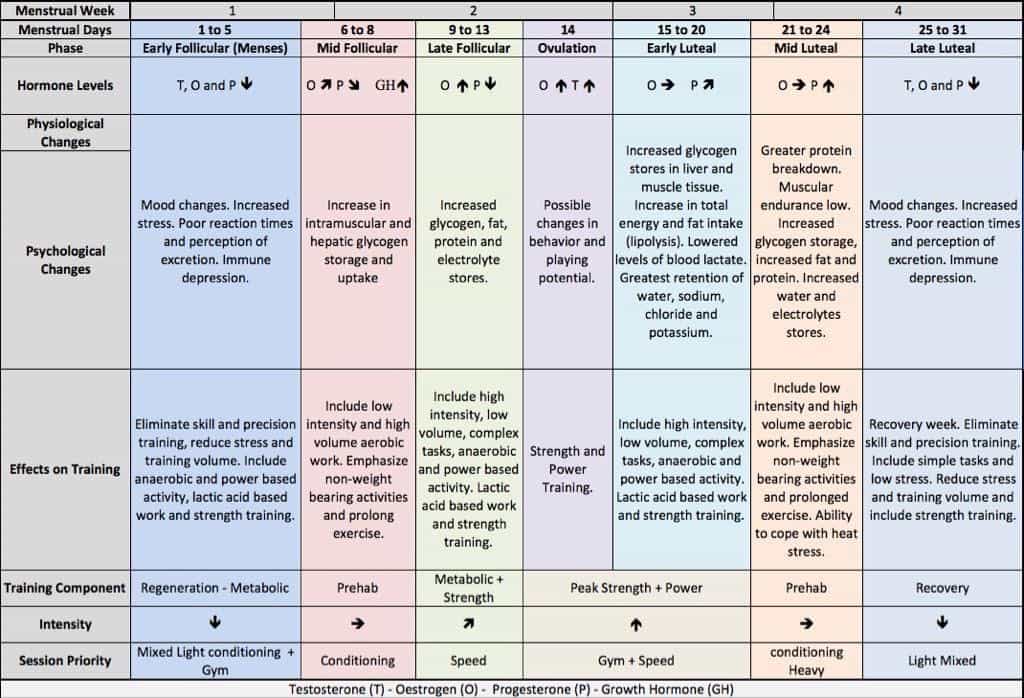 Progesterone and oestrogen are both antagonists to cortisol as well. As I mentioned in a previous blog post the negative effects of the stress hormone cortisol from metabolic conditioning training have been largely over-egged in my opinion. There is a rise in cortisol following a hard training session but this is not a problem if there is an adequate increase in anti-cortisol hormones.

Training in a way that maximises hormone changes in your cycle may reduce negative effects of your cycle. When myself and other trainers at Storm have changed women who have been struggling around their cycle to a training program that accounts for hormonal changes they have reported the following;

Better sleep
Less fat storage
Better feeling of wellbeing during menstruation
Less feelings of agitation and frustration (Thank goodness ;))
What to do

During the luteal phase you may find that you naturally crave chocolate and fatty foods. This is thought to be because of the hormone interaction going on at this stage of your cycle and its effect in your brain. Namely as progesterone and oestrogen fall this has an effect on GABA, serotonin and dopamine associated with feeling good and a feeling of reward.

What’s the answer to this?

Well… cocoa has a proven effect on neurotransmitters Serotonin and Dopamine as does doing something you like that gives you a feeling of reward….so my advice?

Get on the sofa with some dark chocolate and your favourite film!